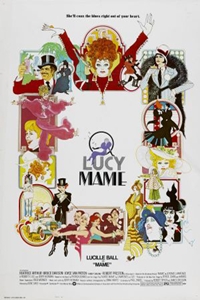 Cast as the title character in this second movie adaptation of a Patrick Dennis book and Jerry Herman musical, Lucille Ball plays an independently wealthy woman who marries a man and has to deal with his family.

She'll coax the blues right out of your heart!

Bea Arthur, who won a Tony for her role in the stage version, reprises the part.