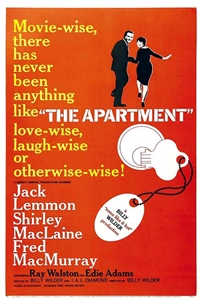 Join us for a month long exploration of Classic Academy Award Winners at the ESQUIRE THEATRE leading up to The Academy Awards on February 9th. We continue with Best Director!

Synopsis: A man tries to rise in his company by letting its executives use his apartment for trysts, but complications and a romance of his own ensue.