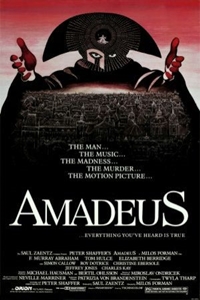 Described by Shaffer as "a fantasia based on fact," Amadeus was inspired by persistent rumors in the early 19th Century that Mozart had been poisoned by his rival Salieri, a successful court composer driven mad by the revelation of his own mediocrity when compared to Mozart's God-given genius. Transcending both Salieri and Mozart are the universal themes they represent: the relationship between man and God; the difficulty of serving a God whose ways are often perceived as irrational, perverse and mockingly cruel; the confrontation of genius and mediocrity; and as in the tragic case of Mozart, the sad spectacle of a towering genius poorly rewarded and pushed to destruction by society.