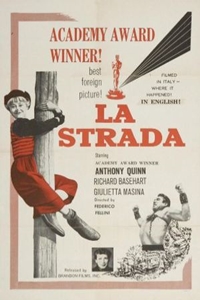 Federico Fellini, who would have celebrated his 100th birthday this year, is without question an icon of world cinema, winning more "Best Foreign Film" Oscars than any director while being ranked by THE CINEMA ARCHIVES as the #5 filmmaker of all time and #17 by ENTERTAINMENT WEEKLY magazine. In a career spanning four decades, Fellini established himself as the heart and soul of Italian cinema ranging from the Neorealism post-war period through the height of the "art film" era of the 60s and into the politically and sexually dynamic films of the 70s. The Esquire celebrates this recipient of the "Order of Merit of the Italian Republic" (its highest ranking honour) with three of Fellini's unforgettable classics from the three main decades of his cinematic prominence:

LA STRADA (THE ROAD) scores a 97% on Rotten Tomatoes, the Critics Consensus: "Giulietta Masina and Anthony Quinn's pitiable pair of outsiders provide a poignant contrast between gentleness and might in Federico Fellini's unforgettable parable."

This bittersweet study of characters on "the road" holds the remarkable distinction of being the first recipient of the "Best Foreign Language Film" Academy Award, and forever planted Fellini on the radar screen of film lovers. Starring Fellini's wife Giuletta Masina and the magnificent Anthony Quinn as circus "strong man" Zampano, LA STRADA was called by AFI "one of the most influential films ever made" and has become (along with BICYCLE THIEVES) perhaps the iconic example of Italian Neorealism.

Synopsis: A care-free girl is sold to a traveling entertainer, consequently enduring physical and emotional pain along the way.

Don't miss the rest of the series!

The 4:00pm show each Sunday will include an intro and Q&A discussion with Film Professor Joe Horine!